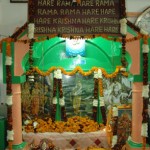 The Bhajan Hall occupies a unique place in the history of Sivananda Ashram. Swami Kaivalyananda of Calcutta envisaged the construction of a temple and a hall for satsanga and prayer meetings in the Ashram. He formed The Mandir Building Committee in 1941. As the need for a hall was very urgent, construction was completed in a very short tome and the Bhajan Hall was formally opened on April 2nd, 1942. It became the place for holding not only the daily prayer and satsanga, but also all the spiritual retreats, special functions and Puja, etc.

As the World War II prolonged with no end in sight for restoration of peace, Gurudev decided to start non-stop kirtan of the Mahamantra from 3rd Dec 1943. And as peace is a precondition of happiness and welfare of the mankind, the nonstop kirtan of the Mahamantra has continued day and night without a minute’s break even today after more than 68 years. The Bhajan Hall is also the abode of Lord Kartikeya and daily Puja, occasional special Puja and special Skanda-Puja every year for six days immediately after the Dipavali are performed here. All these spiritual activities, Puja, and non-stop chanting have left behind special spiritual vibrations in the Bhajan Hall.

Here also we can notice the broad outlook of Gurudev Swami Sivanandaji. The Hall is decorated with pictures of various saints and sages. A German devotee of Gurudev prepared statues of Durga Devi and Sarasvati Devi. Both have been prominently placed in the Hall. The easy chair he was using is also kept there, as if to signifying he is ever present in his favourite place of satsanga. When you visit Sivananda Ashram, do not fail to spend few minutes in silence here.