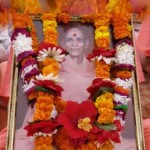 A Biography of Swami Chidananda

Sridhar Rao, as Swami Chidananda was known before taking Sannyasa, was born to Srinivasa Rao and Sarojini, on the 24th September 1916, the second of five children and the eldest son. Sri Srinivasa Rao was a prosperous Zamindar owning several villages, extensive lands and palatial buildings in South India. Sarojini was an ideal Indian mother, noted for her saintliness.

At the age of eight, Sridhar Rao’s life was influenced by one Sri Anantayya, a friend of his grandfather, who used to relate to him stories from the epics, the Ramayana and the Mahabharata. Doing Tapas, becoming a Rishi, and having a vision of the Lord became ideals which he cherished.

His uncle, Krishna Rao, shielded him against the evil influences of the materialistic world around him, and sowed in him the seeds of the Nivriti life which he joyously nurtured until, as latter events proved, it blossomed into sainthood.

His elementary education began at Mangalore. In 1932 he joined the Muthiah Chetty School in Madras where he distinguished himself as a brilliant student. His cheerful personality, exemplary conduct and extraordinary traits earned for him a distinct place in the hearts of all teachers and students with whom he came into contact.

In 1936, he was admitted to Loyola College, whose portals admit only the most brilliant of students. In 1938, he emerged with the degree of Bachelor of Arts. This period of studentship at a predominantly Christian College was significant. The glorious ideal of Lord Jesus, the Apostles and the other Christian saints had found in his heart a synthesis of all that is best and noble in the Hindu culture. To him, study of the Bible was no more routine; it was the living word of God, just as living and real as the words of the Vedas, the Upanishads and the Bhagavadgita. His innate breadth of vision enabled him to see Jesus in Krishna, not Jesus instead of Krishna. He was as much an adorer of Jesus Christ as he was of Lord Vishnu.

The family was noted for its high code of conduct and this was infused into his life. Charity and service were the glorious ingrained virtues of the members of the family. These virtues found an embodiment in Sridhar Rao. He discovered ways and means of manifesting them. None who sought his help was sent away without it. He gave freely to the needy.

Service to lepers became his ideal. He would build them huts on the vast lawn of his home and look after them as though they were deities. Later, after he joined the Ashram, this early trait found in him complete and free expression where even the best among men would seldom venture into this great realm of divine love, based upon the supreme wisdom that all are one in God. Patients from the neighborhood, suffering from the worst kinds of diseases came to him. To Sridhar Rao the patient was none other than Lord Narayana Himself. He served him with tender love and compassion. The very movement of his hands portrayed him as worshipping the living Lord Narayana. Nothing would keep him from bringing comfort to the suffering inmates of the Ashram, no matter what the urgency of other engagements at the time.

Service, especially of the sick, often brought out the fact that he had no idea of his own separate existence as an individual. It seemed as if his body clung loosely to his soul. Nor was all this service confined to human beings. Birds and animals claimed his attention as much as, if not more than, human beings. He understood their language of suffering. His service of a sick dog evoked the admiration of Gurudev. He would raise his finger in grim admonition when he saw anyone practicing cruelty to dumb animals in his presence.

His deep and abiding interest in the welfare of lepers had earned for him the confidence and admiration of the Government authorities when he was elected to the Leper Welfare Association, constituted by the state-at first as Vice-Chairman and later as Chairman of the Muni-ki-reti Notified Area Committee.

Quite early in life, although born in a wealthy family, he shunned the pleasures of the world to devote himself to seclusion and contemplation. In the matter of study it was the spiritual books which had the most appeal to him, more than college books. Even while he was at the college, textbooks had to take second place to spiritual books. The works of Sri Ramakrishna, Swami Vivekananada and Sri Gurudev took precedence over all others. He shared his knowledge with others, so much so that he virtually became the Guru of the household and the neighborhood, to whom he would talk of honesty, love, purity, service and devotion to God. He would exhort them to perform Japa of Rama-Nama. While still in his twenties he began initiating youngsters into this great Rama Taraka Mantra. He was an ardent admirer of Sri Ramakrishna Math at Madras and regularly participated in the Satsangas there. The call of Swami Vivekananda to renounce resounded within his pure heart. He ever thirsted for the Darshan of saints and Sadhus visiting the metropolis.

In June 1936, he disappeared from home. After a vigorous search by his parents, he was found in the secluded Ashram of a holy sage some miles from the sacred mountain shrine of Tirupati. He returned home after some persuasion. This temporary separation was but a preparation for the final parting from the world of attachments to family and friends. While at home his heart dwelt in silent forest of spiritual thoughts, beating in tune with the eternal Pranava-Nada of the Jnana Ganga within himself. The seven years at home following his return from Tirupati were marked by seclusion, service, intense study of spiritual literature, self-restraint, control of the senses, simplicity in food and dress, abandonment of all comforts and practice of austerities which augmented his inner spiritual power.

The final decision came in 1943. He was already in correspondence with Sri Swami Sivanandaji Maharaj of Rishikesh. He obtained Swamiji’s permission to join the Ashram.

On arrival at the Ashram, he naturally took charge of the dispensary. He became the man with the healing hand. The growing reputation of his divine healing hand attracted a rush of patients to the Sivananda Charitable Dispensary.

Very soon after joining the Ashram, he gave ample evidence of the brilliance of his intellect. He delivered lectures, wrote articles for magazines and gave spiritual instructions to the visitors. When the Yoga-Vedanta Forest University (now known as the Yoga-Vedanta Forest Academy) was established in 1948, Sri Gurudev paid him a fitting tribute by appointing him Vice-Chancellor and Professor of Raja Yoga. During the first year he inspired the students with his brilliant exposition of Maharishi Patanjali’s Yoga-Sutras. It was also in the first year of his stay at the Ashram that he wrote his magnum opus, `Light Fountain’, an immortal biography of Sri Gurudev. Sri Gurudev himself once remarked: “Sivananda will pass away, but `Light Fountain’ will live.”

In spite of his multifarious activities and intense Sadhana he founded, under the guidance of Gurudev, the Yoga Museum in 1947, in which the entire philosophy of Vedanta and all the processes of Yoga Sadhana are depicted in the form of pictures and illustrations.

Towards the end of 1948, Gurudev nominated him as General Secretary of the Divine Life Society. The great responsibility of the organisation fell on his shoulders. From that moment he spiritualized all its activities by his presence, counsel and wise leadership. He exhorted all to raise their consciousness to the level of the Divine.

On Guru Purnima day, the 10th of July, 1949, he was initiated into the holy order of Sanyasa by Sri Swami Sivanandaji Maharaj. He now became known as Swami Chidananda, a name which connotes, “One who is in the highest State of Consciousness and Bliss”.

In November, 1959, Swami Chidanandaji embarked on an extensive tour of America, being sent by Gurudev as his personal representative to broadcast the message of Divine Life. He returned in March, 1962.

In August 1963, after the Mahasamadhi of the Master, he was elected as the President of The Divine Life Society. After election, he strove to hold aloft the banner of renunciation, dedicated service, love and spiritual idealism, not only within the setup of the widespread organisation of the Society, but in the hearts of countless seekers throughout the world, who were all too eager to seek his advice, help and guidance.

Sri Swami Chidanandaji toured the length and breadth of India, Malaysia and South Africa to serve the devotees of the Society. Again in 1968, he undertook the Global Tour at the request of numerous disciples and devotees of holy Master Sri Swami Sivanandaji Maharaj and visited many countries of the world. Wherever he went devotees received him cordially and listened to him with rapt attention. Sri Swami Chidanandaji, worked and served the Divine Cause of Gurudev Sri Swami Sivanandaji’s Mission tirelessly to spread his Divine Life Message far and wide not only in Bharatavarsha but also in countries outside.

On the 24th of September, 1991 the Headquarters of The Divine Life Society Shivanandanagar (Rishikesh) as well as all Branches of the Society celebrated his 75th Birthday Anniversary (Amritamahotsava).

“Service before Self” epitomized the entire life of this austere saint, who kept alive the spirit of the ancient Vedantic tradition in these confused and turbulent times, much like his own Master Sivananda. The clarion call given by these sages drew many a seeker from all over the world to Sivananda Ashram, Rishikesh. His inspiring early morning meditation talks given in the Ashram, and compiled under titles such as, “Ponder these Truths”, “A Call to Liberation” and “Seek the Beyond”, have been compelling reference-points for hundreds of seekers and aspirants.

As Swami Chidanandaji would exhort and inspire his listeners, “To enter into the spiritual life is a rare blessedness, it is a great good: to take it seriously and engage in active spiritual Sadhana is a second blessedness and a still greater good: but to persevere in the spiritual life, to be ever progressive and ceaseless in one’s spiritual life, is the greatest good, the crowning blessedness”. This was his message as one of India’s representatives to the Centenary of the World Parliament of Religions in 1993, at Chicago and his own life was a living testimony to the great ancient ideals he reiterated for the modern age.

Ever-vigilant in his personal Sadhana, ever compassionate to the poor and needy, ever-willing to champion the cause of the underprivileged, Swami Chidanandaji  stands out for his exemplary selfless service in the cause of the leper colonies in Rishikesh, and nearby places. He is often referred to as the St. Francis of India, after the great Franciscan monk, St. Francis of Assisi, of whom Swami Chidananda himself was greatly attracted to.

This prominent saint of contemporary times and a great Yogi, the President of the Divine Life Society, Rishikesh, established by Gurudev Sri Swami Sivanandaji Maharaj, Sri Swami Chidananda Saraswati ji Maharaj, attained Mahasamadhi on August 28th, 2008 at 08:11 p.m. at the age of 92.

Swami Chidanandaji’s passing away leaves a huge void in the hearts and minds of seekers who search for ultimate truth beyond the transitory and fleeting. In his passing away, for which he had left strict instructions for his body to be immersed in Ganga quickly (Jal Samadhi), and no spectacle be made of in terms of mourning. As in life, Swami Chidanandaji remained a humble, simple monk, upholding the highest values of India’s monastic traditions. Despite being the President of an international organization with centers across the globe, for forty five years, besides being an ideal preceptor to thousands across the world, he always considered himself as a servant of Holy Master Sri Swami SIvanandaji Maharaj.