Christ To The Spiritual Aspirant 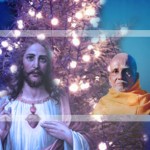 Jesus, the Christ, the Light of the world, the Supreme Logos made visible to the human eye, stands as an unparalleled example and pattern of sacrifice, love, knowledge and realisation of Truth. To the Sadhaka or the spiritual aspirant the person of Jesus reflects the art of the inner life, life in the spirit. Christ, the Son of Man, representing the life and voice of humanity and forming as it were the sum and substance of the essence of man, is the Son of God, the incarnate effulgence of the Sovereign of the Universe. It is the crystallisation of spirit that we call the Mystic Christ, the Light that is born to save the world of darkness. As the darkness of the world is not an outward phenomenon, so is the remover of this darkness not a mere physical personality. Great men are not seen from their bodies. It is not the form or the body that is the great man. The great man is the behaviour, the conduct, the character, the speech, the thought and conscious expression of any kind. From these special characteristics the presence of the great man is inferred and directly perceived. He is great who has comprehended that stupendous ocean of Spirit, the Great God that twinkles in all eyes, that resides in the hearts of all beings.

We have in Christ the great man of the Spirit, and his life is a picturesque drama of Adhyatmika Sadhana or spiritual living. From his manifestation to his re-absorption he displayed the magnificence of God and established His Glory on earth. When the spiritual child is about to be born the Ruler of the empire of darkness shall try to slay it and the child has to be protected with great difficulty. Once the child grows up it shall take care of itself. The individual person is the parent of the new-born spiritual boy and let him guard it against the onslaught of the Ego, the king of this city where the baby is born. Just at the time when the spiritual consciousness tries to emerge out by gradual steps a natural revolt of the unspiritual forces is quite inevitable. It is true that ghee is burnt up when it is poured into fire, but if a maund of ghee is poured over a spark of fire, the spark will be extinguished. When the spark becomes a huge conflagration any amount of ghee can be consumed by it. In like manner, the worldly tendencies would overpower the spiritual spark when it is in the infant stage, but the conflagration of spiritual consciousness shall burn up worldly tendencies and all evil. What is called the “dark night of the soul,” in the terminology of the mystics, is a stage where the consciousness is smothered and is smouldering amidst the darkness of ignorance. The birth of Sri Krishna is involved in similar circumstances and is indicative of similar facts, and the first Chapter of the Bhagavadgita depicting the dejection of spirit of the aspiring soul marks identical situations. The spiritual self is bound to succeed, and destroy nescience root and branch.

The work of the manifesting Spirit is not complete even when it has begun to keep through the vesture of flesh, after managing to save itself from the attacks of the outward nature. The greater trouble arises from the higher planes of nature. Difficult enough it is, no doubt, to pass through the forest of the gross physical nature, but more difficult and hazardous is the attempt to overcome the subtler forces of the vibrant mental nature which is the pivot of outward universal activity. When the soul sheds sufficient light, enough to blind the eyes of the psychological nature, a revolt of the latter becomes the result. This revolt is now in no way advantageous to the lower nature; for it only means the revelation of the extraordinary power of spiritual knowledge and experience and the crucifixion of the flesh, the very playground of the lower nature. The individualistic vestment is cast off, the turbulent passionate nature is punished and the son of Man re-enters the Kingdom of God which is the birthright of the son of God.

In Christ one finds the ‘Jivanmukta’ of the Indians. As one standing at noon in cool waters up to the waist experiences cold and heat simultaneously, the illumined sage moving on earth, with a body, experiences bliss and trouble simultaneously, with his head and heart in Heaven and feet on earth. Jesus came to make people understand and know in experience that the aim of life is not to do something else, but to be something else. It is not wrong action that should attract our attention and demand rectification, but the organic defect in us which is the source and the root of wrong action. Unless one is reborn there is no hope. To become something completely different, to change one’s nature, to be initiated into the unique spiritual experience, means dying to the life of flesh and being alive to the superior awareness. It is not the ceremonial act of the Jew, but the consciousness-experience of the Christian that is the ultimate solace of the individual, that is at present confined to the narrow tabernacle which is the abode of all corruption and pain. It is not subjection to rule and rigidity of ritual that is the law of spirit, but perfect freedom in the Glory of God-consciousness. Man is the child of the Universe by birth, but he is the child of God by re-birth. Self-control and asceticism are the roads to inner peace. The pleasures of the world are vain, tantalising and deceitful; they are not worth being resorted to, He who loves the world loves not the Father.

Christ was conscious of Adhikaribheda among students of spiritual knowledge and was particular to impart the higher wisdom to the initiates alone, to those who are capable of rousing the inner consciousness, while to the outwardly busy he spoke in parables. “Unto you is given the mystery of the Kingdom of God; but unto them that are without, all things are done in parables.” “And which many such parables spake he the word unto them, as they were able to hear it; and without a parable spake he not unto them: but privately to his own disciples he expounded all things.” Jesus has clearly told his disciples that he had many other things which he wanted to speak to them but which they could not understand. Jesus comes close to Hindu and Buddhistic ideals in many respects, and sounds practically an echo of the ethical teaching of these older religions. The death or non-existence of the immediate personal existence is, to all these religions, the condition of the new richer life.

To merge in the satiating waters of immortality, one must first drink of the cup of death. No man on earth, generally speaking, is prepared for this order. This, too, is illustrated in the life of Jesus. He wished that the cup be taken away from him,—look at the force with which the lower nature presses the soul,—but he opened his eyes and his vision became clear, and he said: “Thy will be done.” The stresses of physical life entangle the higher and nobler reaches of the soul, and to keep one’s balance in the face of manifest hostility is indeed a tremendous task. It is given to a very few like Jesus to dive into the depths constantly and regain the solacing consciousness which is immaterial and trans-empirical. The whole life of Jesus is one tale of the march of the soul to its destination which is the complete unfolding of consciousness.

A life of mere negativity is not what is preached by Christ. It is not only the emptying of the soul, the selling away of whatever we have, the parting with everything that we possess, but the supreme fulfilment of Spirit through divine contemplation. But the rejection of the outward show is a necessary pre-condition of this divine fulfilment. We cannot fill a vessel with nectar when it already contains filth to the brim. Spiritual life is at once the transcending of the mundane consciousness and the saturation of oneself in the metempirical Self-consciousness or God-consciousness.

The student or aspirant who wishes to lead the life ideal should receive inspiration from the conduct of Jesus, from his life and teachings, live a life of holiness and piety, embrace humility and poverty, become a friend of the poor, love the neighbour as himself, sacrifice his all to Him, suffer and weep for His sake, cast off the flesh and its passions, and die to be born for the life eternal. It means the withdrawal of faith in things that seem and perish resting on the firm belief in the omnipotence of the Maker of all things, and caring not for oneself and one’s needs, for God shall take care of all, with His simultaneous knowledge of past, present and future. This reborn soul is the sage, the Rishi, the Mukta, the redeemed one who is one with God. The son and the Father are one. The universe produces a rare ripe fruit of a saint from its fine flower of virtue and knowledge, makes him the cream of mankind and sacrifices him to the Great Father. Here is the consummation of existence. Christ’s ascension to Heaven is regaining the Consciousness of God.

Christ was the matchless spiritual teacher who pointed out that the Kingdom of Heaven is within. All his other teachings are a commentary on this text. His teaching is summed up by his statement: “I and my Father are one.” The individual soul is one with the Supreme Being. Ayamatma Brahma. Sarvam Khalvidam Brahma. Jivo Brahmaiva Naaparah.