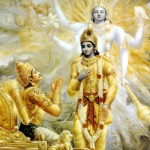 PHILOSOPHY OF THE BHAGAVAD GITA

The philosophy of the Srimad Bhagavad Gita deals with the situation of the individual pilgrim soul upon this earth plane, in the midst of the very vexing problems that constitute an inevitable part of the individual’s life. It takes the life of the jivatma in this prapancha, beset by the dvandvas, love and hate, like and dislike, attachment and repulsion. It takes the life of the jivatma faced with the situation of an inner, essential conflict between what one would like to do and what one is required to do between one’s sentiments, emotions and attachments and one’s duty in one’s station in life. It takes the life of an individual trying to grapple with this inner conflict of bhavana (feeling) and kartavya (duty), this inner conflict of the sreya (good) and the preya (pleasant), this inner conflict of dharma, which is very difficult, and the easier way.

It provides the necessary strength to the individual by enlightening him with the hidden reality of the situation. Because of his insufficient understanding, his lack of proper perspective, the individual takes the situation to be what it appears to be and does not try to analyse it beyond and behind the surface appearance, nor try to understand it as it is in essence. He thus takes to a certain course of action which is contrary to his own highest welfare and supreme good and which is also contrary to the good of the world in which he lives.

The Gita, by bringing into our antahkarana, into our minds and hearts and intellects, the light of proper reasoning, correct perception and right understanding, liberates us from the delusion that brings about such conflicts, such inner two-ways pulls. When one understands a situation properly and one sees things clearly, one is then able to understand, to know, what the essence of the situation is in fact, not what it appears to be. How does the Gita do this?

The philosophy of the Gita is not just a declaration of experienced truth. It is not merely an expounding of a certain revelation. But, from start to finish, it is dialectic in its method of approaching this question of the individual in this universe, of his situation in life and the various problems and conflicts that surround him as he tries to execute this journey of life. It takes on an approach that is dialectic, in that every chapter constitutes the imparting of certain teachings. It is a teacher teaching a student. It is like a class lesson and the teacher takes great pains to clarify intricate points and to answer all the questions of the student, to remove all doubts as the student goes on asking questions and placing doubts before him.

Therefore, the philosophy of the Gita is an educative process of bringing the individual soul from a state of wrong understanding, a state of a mixed-up interior, a state of confusion, into a higher state of right understanding, a clarity of perception and vision and a very clear interior. The episode of the Gita sets the stage for this educative process of a teacher teaching one with lesser knowledge. In this process, the teacher attempts to lift the student up into the state of a fullness of knowledge that characterises the teacher himself. The teacher makes the student see through the teacher’s eyes; whereas, before, the student was trying to look at things only through his own eyes.