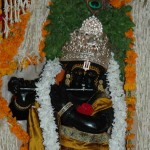 THIS IS THE birthday of Lord Krishna, the eighth Divine Incarnation. It falls on the 8th day of the dark half of the month of Bhadrapada (August-September). This is one of the greatest of all Hindu festivals. Lord Krishna was born at midnight. A twenty-four hour fast is observed on this day, which is broken at midnight.

Temples are decorated for the occasion. Kirtans are sung, bells are rung, the conch is blown, and Sanskrit hymns are recited in praise of Lord Krishna. At Mathura, the birthplace of Lord Krishna, special spiritual gatherings are organised at this time. Pilgrims from all over India attend these festive gatherings.

The Lord appeared when the moon entered the house of Vrishabha at the constellation of the star Rohini, on Wednesday, the 8th day of the second fortnight of the month of Sravana, which corresponds to the month of Bhadrapada Krishnapaksha according to the Barhaspatyamana, in the year of Visvavasu, 5,172 years ago (from 1945), which means 3227 B.C.

Study the Bhagavatam and the Pancharatras, which are equal to the Upanishads. You will know all about the glory of Lord Krishna, His Lilas and superhuman deeds. The eighth Avatara, Krishna, who has become the Beloved of India and the world at large, had a threefold objective: to destroy the wicked demons, to play the leading role in the great war fought on the battlefield of Kurukshetra (where he delivered His wonderful message of the Gita) and to become the centre of a marvellous development of the Bhakti schools of India.

Sri Krishna is the ocean of bliss. His soul-stirring Lilas, which are the wonder of wonders, are its waves. The honeyed music of His flute attracts the minds of His devotees from all three regions. His unequalled and unsurpassed wealth of beauty amazes the animate and the inanimate beings. He adorns His friends with His incomparable love.

His palms bear the signs of a lotus and discus, the right sole of His feet of a flag, lotus, thunderbolt, an iron goad, barley seed, and the Swastika. His left sole has the rainbow, triangle, water-pot, crescent, sky, fish, and a cow’s footprint. His Form is composed of condensed universal consciousness and bliss. His Body pervades the entire cosmos.

Devotion is the only means of attaining Lord Krishna. Bhakti kindles love for the Lord. When love is directed towards Krishna, man is freed from the bondage of the world.

Though Lord Krishna appeared in a human body, He had a divine body not composed of the five elements. He did not take any birth here in the usual sense of the term. He did not die. He appeared and disappeared through His Yoga Maya as He has declared in the Gita. This is a secret, known only to His devotees, Yogis and sages.

His enchanting form with flute in hand is worshipped in myriads of homes in India. It is a form to which is poured out devotion and supreme love from the hearts of countless devotees not only in India but also in the West. Millions of spiritual seekers worship Him and repeat His Mantra, Om Namo Bhagavate Vasudevaya.

Lord Krishna was great in knowledge, great in emotion, great in action, all at once. The scriptures have not recorded any life more full, more intense, more sublime and grander than the life of Sri Krishna.

Krishna has played various roles during His stay in the world. He was Arjuna’s charioteer. He was an excellent statesman. He was a master musician; he gave lessons even to Narada in the art of playing the veena. The music of His flute thrilled the hearts of the Gopis and everyone else. He was a cowherd in Brindavan and Gokul. He exhibited miraculous powers even as a child. He killed many demons. He revealed His Cosmic Form to His mother, Yasoda. He performed the Rasa Lila, the secret of which can only be understood by devotees like Narada, Gauranga, Radha and the Gopis. He taught the supreme Truth of Yoga, Bhakti and Vedanta to Arjuna and Uddhava. He had mastered every one of the sixty-four fine arts. For all these reasons He is regarded as a full and complete manifestation of God.

An Incarnation is the descent of God for the ascent of man. A ray from the Cosmic Being in His potential state of manifestation descends on earth with mighty powers to keep up the harmony of the universe. The work done by the Incarnation of God and His teachings produce a benign influence on human beings and help them in their upward divine unfoldment and Self-realisation.

The Incarnation comes to reveal the divine nature of man and makes him rise above the petty materialistic life of passion and egoism.

The Incarnations usually come with their particular or favourite groups or companions. Lord Rama came with Lakshmana, Bharata and Shatrughna. Lord Krishna came with Balarama, Devas and Rishis. Sanaka came with Sanandana, Sanatkumara and Sanatsujata. Some, like Sri Shankara and Ramanuja, come as teachers and spiritual leaders. Some, like Chaitanya, are born to instill devotion in the hearts of people and turn their minds towards God. The Incarnations proper, like Krishna, come only when there is widespread catastrophe in the world.