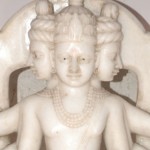 ( Dattatreya Jayanti Message from the book Awake! Realise Your Divinity!)

Worshipful homage unto Dattatreya, the trimurti avatara, the divine son of the austere and illumined Sri Atri Maharshi and sati sadhvi, mahapativrata, rishi patni Sri Anasuya. May the benedictions of this divine couple be upon all married couples, in all countries, throughout the world.

And this unique manifestation was the direct result of the irresistible devotion of a chaste dharmapatni, Sati Anasuya, the wife of the great sage Atri Maharshi. Her chastity was well known throughout the three worlds, the celestial worlds, the heavenly worlds and this earth plane. She was known to be the symbol of the highest purity as a housewife. And it was the power of her chastity that rendered the three murtis into little infants. Later on it was the same power of chastity and her chaste love for these infants that made them grant the boon that she desired.

May the blessings of sati sadhvi Anasuya be upon all women throughout this world today. May they be filled with the lofty, supreme power of life-sanctifying chastity and may the power of the tapasya of Atri Maharshi bless all sad-grihasthas and make them shine with sadachara, shine with the power of purity, self-control and fidelity to their life-partner. This is the one thing needful in the world of today.

For it is the character, the nature of the parents, their purity of conduct and character, that decides the nature, svabhava, and the moral fibre of the child that is born to them. For the child is not biologically or physically different and apart from the father and mother. They are one. It is the parents themselves manifesting in the form of a new generation. Therefore, what the parents are, what their inner state or condition is, their psyche is, becomes the nature of the child. It is that which decides its behaviour.

Therefore, if the world of tomorrow is to be peopled by citizens of sterling moral character, of self-control, moderation, purity, high idealism, chastity, good conduct and lofty character, then it is indispensably necessary that the source from which they spring should be of the same lofty nature. If one generation is fired with lofty idealism and is of sterling moral worth, then the succeeding generation will also tend to be likewise, to be of great moral worth.

Therefore, there is a close connection between a married couple and their offspring. From the offspring you can judge what the parents might have been. From the parents you can judge what the offspring is going to be, quite apart from the fact that each jivatma, individual soul, comes with its own previous karma-janita (born of karma) samskaras and vasanas. The austere, self-controlled sage of sterling character and conduct, Atri Maharshi and the shining exemplar of absolute chastity and fidelity, Sati Anasuya, thus became worthy of being parents to no less than God Himself, the divine trinity of Brahma, Vishnu and Mahesvara themselves. By the power of her chastity and his penance, they proved eminently deserving and worthy of being parents of Divinity.

May the divine grace of Dattatreya be upon you all. He was a supreme yogi. Like Dakshinamurti, He was the adi guru, the primal world teacher. Contemplate His life. Meditate upon Him. Feel His divine presence. Evoke in your mind the sacred memory of Sati Anasuya and Atri Maharshi, the power of chastity, and divine grace in the form of Divinity taking birth at the earnest supplication and prayer of a heart filled with devotion. The earnest prayer of a heart filled with devotion never goes unanswered or unfulfilled. This is what the advent, the avatara of Dattatreya represents or proves.

Try ever to be steeped in the lofty teachings of Guru Dattatreya. His one admonition and His one teaching was God-consciousness. Until you realise God, attain God- consciousness and become established in God-consciousness, ever strive to keep yourself by continued, unbroken effort in a state of awareness of your divinity, at least upon the intellectual level. May there not even be one moment when there is any doubt about your divinity in your mind or intellect. May your intellect be firmly based, with absolute conviction, upon this truth: “I am divine. I am immortal soul, birthless and deathless, beyond time and space, without name and form. I am Atman, formless. I have no limitations. The body does not limit me. The mind does not confine me. I am the limitless, all-pervading Divine-consciousness. This is my true identity. This is my real nature.”

By constant affirmation of your divinity, develop within yourself, within your interior, a state of feeling and thinking, a state of intellectual conviction of your supreme divine nature. This is the one teaching of Jagat Guru, Adi Guru Dattatreya. Never fall into the error, the slumber of Self-forgetfulness or ignorance. Ever strive to keep yourself in a state of ever-wakeful awareness of your divinity. And as His benediction and prasad, this is the one thing we should strive to receive from Him today. Because, He is an immortal who is ever present. He is a nitya avatara, a pratyaksha devata, a living, immortal manifestation of Divinity upon the earth plane. And His direct admonition is: “Be aware, be aware. Be rooted in the consciousness of your essential nature, of your divinity.”

And beloved and worshipful Guru Maharaj Swami Sivanandaji ever hammered this fact into the minds of all his disciples and all sadhaks and seekers who came to him for spiritual instruction. “You are not this body. You are not this mind. You are immortal soul. Know thyself and be free.” That was Gurudev. That was Gurudev’s central message, his central call to modern mankind. “Awake! You are not this perishable clay, this cage of flesh and bones. You are not this restless mind filled with ego, non-discrimination, ignorance and selfishness. You are not this little, finite intellect prone to a hundred errors, subject to confusion and also capable of misleading you through avichara and aviveka. Body, mind, intellect and their functions are all characterised by limitations and imperfections.

“Blessed Immortal Atman, be aware that thou art beyond these three finite instruments, upadhis, that you have acquired through human birth on this planet Earth. They cannot touch or alter the truth of your real identity. Enquire, ‘Who am I?’ Know thyself and be free. Thou art not this body, not this mind. Thou art immortal soul.” Thus beloved and worshipful Holy Master Gurudev Swami Sivanandaji echoed the great teachings of Dattatreya to twentieth century mankind. He is to us what Dattatreya was during His times, in days of yore.

May the blessings of Gurudev, the blessings of Dattatreya and the benedictions of Sati Anasuya and Sage Atri Maharshi enrich your spiritual life and elevate you to lofty heights of divine consciousness and awareness!