The Glory of Divine Mother 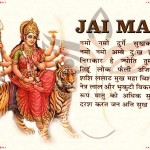 Puranas are sacred scriptures through which the wise seers of ancient times have tried to give us the precious treasures of wisdom, inspiration and guidance. They are holy books into which great sages have packed in deep facts about human life and the secret of success herein and hereafter. Thus these Puranas, the holy repositories of abundance of spiritual knowledge, the sacred treasure-house of vast wealth of vital wisdom of life, have ever exerted a profound influence upon the progress and development of the glorious culture and civilisation of India. The Puranas are the framework into which have been filled the knowledge of the ways and means of conquering man’s lower nature, achieving integral perfection and attaining the glorious goal of a sublime Divine Consciousness. All these they have done through the medium of didactic stories, narratives of deep esoteric significance and symbolism and rich allegory. Knowing well that basically a Hindu is religious in temperament and essentially a being of faith, these sages wove the fabric of such allegory and symbolic narrative around some popular, powerful and permanent aspect of Divinity or a great and renowned Rishi. This Divine personality usually forms the central figure of each particular Purana. You have therefore the Siva Purana, the Vishnu Purana, the Skanda Purana, the Varaha Purana, the Matsya Purana, the Markandeya Purana, the Narada Purana, etc. An important portion of the Markandeya Purana consists of the renowned Devi Mahatmya which glorifies Divinity in its aspect of Sakti or Devi. It is comprised of 700 verses and hence it is also known as Devi Saptasati. And here you have a brief summary containing the very essence of this great scripture of Devi Mahatmya.

Suratha, a king of the solar race, has been defeated by his enemies and forced to flee his capital. He is wandering in exile in a forest. Here he meets a Vaisya (merchant) named Samadhi who is in a similar predicament, having lost everything reduced to penury and abandoned by his own wife and children. Both the king and the merchant are dejected and their thoughts are constantly going back to their family, possessions and property, due to attachment. They fall into conversation and are puzzled as to why their thoughts are again and again dragged towards and centred upon those very persons, things and places whence so much sorrow and pain have come upon them. To solve this vexing problem they approach a sage dwelling in that forest. In answer to their query, the sage tells them that their minds behave in this manner due to the mysterious power of Divine Sakti, Maha Maya. The king and the merchant,—Suratha and Samadhi—are eager to know more about this Divine Sakti, Maha Maya and Her Lilas and glory; and in answer, the sage narrates Devi Mahatmya; and the narrative unfolds thus:

Before the dawn of creation, at the commencement of the Kalpa when Lord Maha Vishnu is reposing upon the bosom of the vast undifferentiated ocean, two terrible Asuras,—Madhu and Kaitabha,—arise out of His Cosmic Being. They are terrible. They are dangerous and having perceived Brahma they set upon him to destroy him. Threatened by these powerful Asuras and menaced by their malevolent motive, in great fear Brahma invokes the supreme, indescribable Divine Power, the Primordial Power, Para Sakti or Adi Sakti and implores Her merciful intervention.

The Divine Mother appears and awakens Lord Narayana from His Cosmic slumber. The Lord engages Madhu and Kaitabha, the two Asuras, in battle and destroys them both. Thus ends the first phase of the narrative.

All the gods and the celestials hail the Mother with cries of victory. Mahishasura, a powerful demon, has overcome all the Devas and has subjugated them. He is terrorising the three worlds. He is enraged to hear the Devas crying victory unto the Mother. He thinks that he alone is supreme. He is arrogant in the extreme. He will tolerate no other being to question his power. Therefore, he decides to make war upon the Divine Sakti whom the Devas are hailing. He confronts the Mother with drawn weapons. There ensues a terrible fight. Bitter is the struggle. Asura fights from all the elements. He takes fearful forms. But darkness cannot stand before light. The Divine Power is the Supreme Power. Truth always triumphs. Victory is to the Supreme Reality. Devi slays the Asura. The Divine overcomes the undivine. Thus ends the second Phase.

The Divine Mother whose glory shines and dazzles in the three worlds is seated in the Himalayan region in the form of Saila Putri. At this time Sumbha and Nisumbha, two powerful Asuras, hold absolute sway over all the worlds. They have subjugated all the Devas, Yakshas, Gandharvas, Kinnaras and the like. They have rested and got into their possession all the best of things like the celestial Airavata, Uchchaisravas, Kamadhenu, Kalpavriksha and the Chintamani. They are intoxicated with the pride of their prowess and their conquests. Their desire is insatiable. They want to possess more and ever more. Two Dutas from the Durbar of the powerful Asura brothers behold the Divine Mother and decide that She should come into the possession of their royal masters. They inform the Asura Sumbha of their find. Sumbha sends at once a royal messenger to bring Devi to his court. Devi says She can come only to one who conquers Her in combat. She refuses to go with the messenger. The messenger conveys the news to Sumbha. He blazes with anger and sends Dhumralochana. Dhumralochana tries to lay his hands upon Divine Sakti. Devi with a single Humkar of anger reduces him to ashes. He is consumed in the flames of Devi’s wrath. Next the Asura, Raktabija, comes to fight. He is an Asura of extraordinary magical powers. Moreover he is in possession of a boon by which whenever a drop of his blood falls on the earth immediately a new Asura springs upon therefrom. So every time the Devi wounds him and spills the blood, countless powerful Asuras spring anew and fill the field of battle. Devi invokes Kali, the terrible dark-hued deity. All-powerful Kali slays the Asura Raktabija, sucking in with Her terrible outspread tongue the Asura’s blood more quickly than it can flow out of his wounds. Kali sees that his blood never reaches the earth. Thus, the Asura Raktabija is destroyed by the Devi. Sumbha and Nisumbha now confront the Devi. A great battle ensues. Nisumbha is killed and ultimately Devi with Her trident deals the death blow to Sumbha also. The undivine forces are thus totally annihilated. The Divine rules supreme. Vidya has overcome Avidya. Light has conquered darkness. Knowledge shines with the destruction of ignorance. Joy, bliss and immortality reign supreme. The Divine Mother shines in glorious triumph. All hail to Maha Sakti. Glory be to the Mother.